Skip to content
Dr Malcolm Sim is organist of Glasgow Cathedral. He studied piano from the age of four with Pearl Gelfer and subsequently organ with John Turner and Kevin Bowyer. He took up his first church organist post at the age of fourteen. 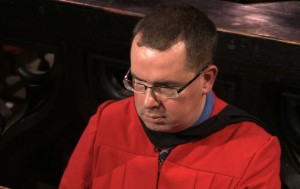 He has been a regular contributor to the recital series on the fine Lewis instrument in Glasgow’s Kelvingrove Museum and Art Gallery. One of his performances was featured on BBC Breakfast Television.

In 2012 he had the honour of contributing to the Queen’s Scottish Diamond Jubilee Service in Glasgow Cathedral.