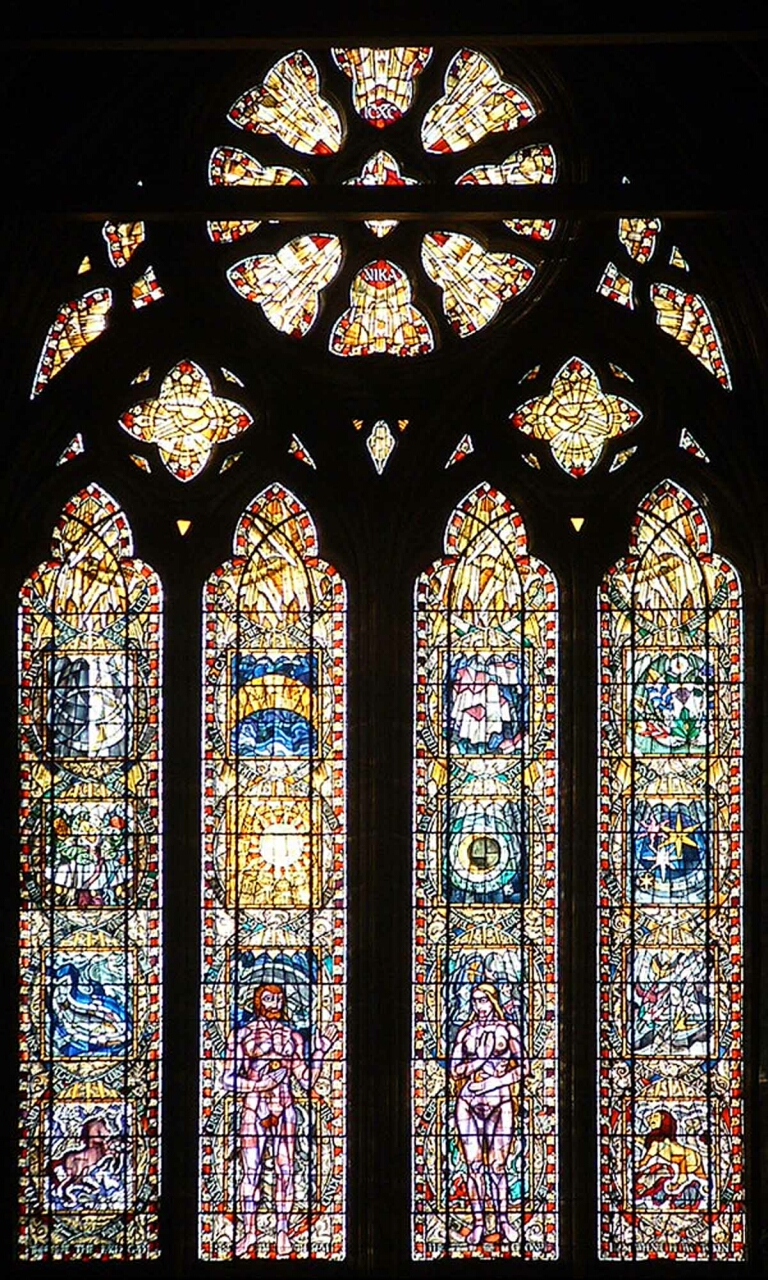 The Great West Window in the Nave of the Cathedral is “The Creation” by Francis Spear. 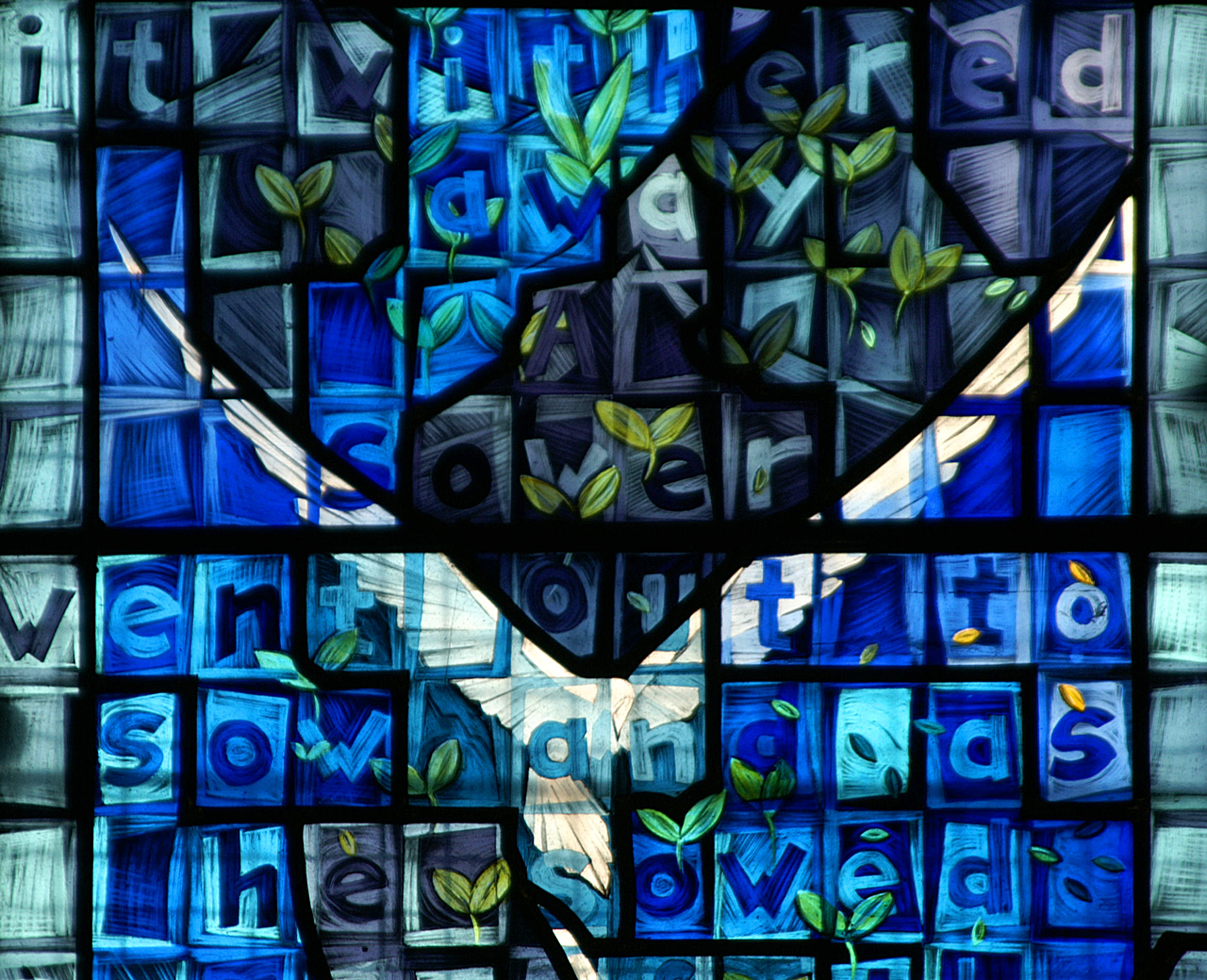 St. Ninian came from Whithorn in Galloway in the 5th century and dedicated a Christian burial ground at Cathures (later Glasgow) in the Kingdom of Strathclyde.

To this spot in the following century came Kentigern, popularly called Mungo. He was born tradition says on the shore in Fife near Culross where the ruins of St. Mungo’s chapel are supposed to mark the spot. At Culross he was brought up by St. Serf and trained for the priesthood.

Mungo left St. Serf and came to Carnock in Stirlingshire from where he accompanied the corpse of a holy man, Fergus, which was carried on a cart by two untamed oxen. They stopped at St. Ninian’s burial ground in Cathures where Fergus was buried. The Blacader Aisle may mark the site.

Kentigern was chosen by the King, clergy and people to be their bishop, and he founded a monastic community and built a church where, reputedly, St. Columba came to visit him. From here Kentigern travelled to Cumbria, to the Lake District, and as far as St. Asaph in North Wales.

The date of his death is given as 13th January, 603. His tomb is in the Lower Church of the Cathedral where there is a service held every year to commemorate his life.

There is little known about the church buildings which stood on the site of the present Cathedral until the early part of the 12th century.

The first stone building was consecrated in about 1136 in the presence of King David I and his Court when John (1117-1147) was Bishop.

Destroyed or severely damaged by fire, this cathedral was succeeded by a larger one consecrated in 1197, during the time of Bishop Jocelyn (1177-1199) to whom we owe the institution of the Glasgow Fair in July, which is still observed as an annual holiday.

In the early 14th century,  the Nave was extended and completed. The south-west door and the entrance to the Blacader Aisle and the walls of the nave up to the level of the sills of the windows belong to this period.

Most of the Nave above sill level probably dates from after 1330, and the West Window from the later 14th century.

The Pulpitum and the Blacader Aisle were added in the fifteenth century.

After the Reformation a wall was put across the nave to allow the western portion of the nave to be used for worship by a congregation which became know as the Outer High. This congregation worshiped in the nave from 1647 until 1835.

The Lower Church was used by another congregation, the Barony, from 1596-1801, until a new church was built just across from the Cathedral.

When the Lower Church was no longer used for worship, soil was brought in to a depth of about five feet and it became the burial place for members of the Barony Congregation. The visible parts of the pillars were coloured black with white “tears”, the graves were enclosed by railings four feet high, with two narrow passages for access. The Lower Church was cleared before the middle of the 19th century.

The congregation which used the Quire was for a time called the Inner High. The pulpit was placed between pillars of the south aisle and the King’s Seat was on the north aisle. In 1805 a major reconstruction saw the pulpit removed to the east end. Galleries were inserted between the pillars on three sides, and the King’s Seat was removed to the western gallery in front of the Pulpitum or Choir Screen.

This brief history has been taken from “A Walk through Glasgow Cathedral” written by the previous Minister of the Cathedral, The Very Revd. Dr. W. J. Morris.

This is the governing body of the Cathedral as in all churches belonging to the Church of Scotland, which follow the Presbyterian tradition. The Kirk Session is a group of individuals inducted as Elders of the Church.

The equivalent of the Womens’ Guild, this organisation allows for the women of the Congregation to meet and discuss various topics relevant to the Church. They also organise fund-raising events in the Church.

The Flower Committee organises a rota of ladies who arrange flower displays for Sunday services, Weddings, Funerals and other services. Money can be donated for the purchase of flowers to commemorate a person’s life or any other special event.

Members of the Linen and Fabrics Committee look after the Clergy’s Robes, Communion Linen and the various sets of Communion Table Covers, Bible Markers, Kneeler Covers and all other aspects of the internal fabric of the Cathedral.

The Drama Club meets on the fourth Sunday of each month. 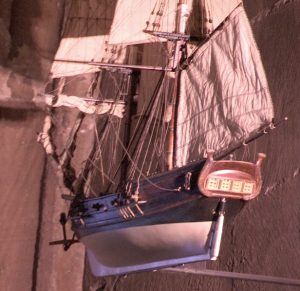 At the end of 2004, the Society of Friends was bequeathed a ship model by the last Sheriff Stanley Gimson with the request that the two-masted brig be hung in the Cathedral in the manner of a votive ship as a reminder of the Clyde’s tradition of shipbuilding.  After discussions with Historic Scotland it was agreed that best location for the ship would be the St Nicholas Chapel at the east end of the Lower Church, – St Nicholas being the Patron Saint of Sailors.  At the end of February 2007, the ship was installed on the south wall of the Chapel.

Votive ships have been hung in churches for many hundreds of years and may have been gifted in thanks for safe delivery from a perilous journey or as a simple reminder to the congregation of a long standing association with the sea or shipping and the community’s indebtedness to those who risk their lives in the business of fishing and trading. Last October the Society outing visited St Monans Church in Fife, where two such models can be seen.  The ship is fixed to the wall by a very slim bronze bracket, commissioned by the Society, and, as is customary, faces east with its bow slightly raised.  As the model is fixed quite high up on the wall, the best vantage point is from the top of the steps leading down to the St Nicholas Chapel.  I am sure that the ship will be of great interest to the many visitors who come to the Cathedral.