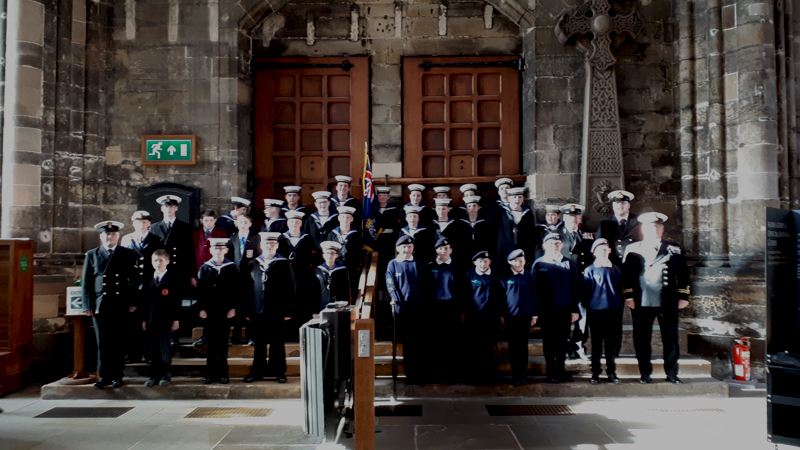 Once again the Cathedral was pleased to welcome the Band of the Royal Marines and Sea Cadets to our annual Seafarers Service at 11:00 am. This morning’s preacher was The Rev’d Robert Jackson MA(Oxon), BA(hons), RNR|FASFLOT Chaplain and lessons were read by Captain John Hood RFA Retd Seafarers UK Scotland & Captain Chris Smith NRC Scotland & Northern Ireland. We were joined at the service by Deputy Lord Provost Bailie Philip Braat, Scottish Port Chaplains from Apostleship of the Sea (Stella Maris), Deacon Joe O’Donnell Senior Chaplain covering Clyde and Grangemouth and Deacon Tom Whin Chaplain for Argyll and the Islands. Prior to, and following the service we were entertained by the musicians from the Band of the Royal Marines Scotland lead by BdSgt A. M. Spain.

The service was, in part, to support the work of Seafarers UK. SEAFARERS UK (King George’s Fund for Sailors) is a charity that helps people in need in the maritime community by giving £2.5m of grants to around 80 smaller specialist maritime charities annually across the UK. The charity’s representative in Scotland is Captain John Hood who read one of the lessons this morning. For further information please visit the Seafarer’s website, seafarers-uk.org.

This website uses cookies to improve your experience while you navigate through the website. Out of these, the cookies that are categorized as necessary are stored on your browser as they are essential for the working of basic functionalities of the website. We also use third-party cookies that help us analyze and understand how you use this website. These cookies will be stored in your browser only with your consent. You also have the option to opt-out of these cookies. But opting out of some of these cookies may affect your browsing experience.
Necessary Always Enabled

Any cookies that may not be particularly necessary for the website to function and is used specifically to collect user personal data via analytics, ads, other embedded contents are termed as non-necessary cookies. It is mandatory to procure user consent prior to running these cookies on your website.